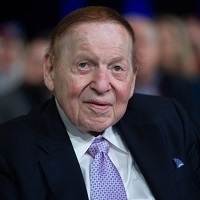 Long time online gambling opponent and source of much trouble for our industry, Sheldon Adelson died last night while hospitalized for non-Hodgkin’s lymphoma, an illness first disclosed in early 2019. He was 87.

The chairman and CEO of Las Vegas Sands and one of the Republican Party’s major donors, Adelson had recently taken a leave of absence to resume treatment for his illness.

He rose from a hardscrabble childhood in Boston to become one of the world’s richest men as founder and CEO of Las Vegas Sands. He was Sands’ first employee, which has now grown to over 50,000 employees.

“His impact on the industry will be everlasting,” the company said. Sands’ shares opened slightly higher Tuesday. His funeral will be held in Israel, and plans for a memorial in Las Vegas will be made at a later date.

You can read more on the passing of Sheldon Adelson at CNN.